Activities in the wild or open nature started as a simple hobby, which became a trend in the late 1970s. Several students of UPN “Veteran” Jakarta began to establish environmentalist clubs in their respective department. Environmentalist clubs in each department were trying to claim their existence by holding mass activities and used other students as their participants. This triggered competitions between departments in recruiting participants for their respective event, it even caused conflicts to bloom between departments at that time.

GIRIGAHANA itself comes from the Sanskrit language where the word "GIRI" means "GUNUNG" (MOUNTAIN) and "GAHANA" which means "JURANG" (RAVINE), so philosophically GIRIGAHANA means "in trying to achieve an ideal or a goal, everything starts from the bottom." So that GIRIGAHANA members are expected to be able to relish every process carried out from the ground up to achieving the peak of glory, not through an instant process.

PURPOSES
The initial purpose of forming GIRIGAHANA was based on several important points which were later outlined in the organizational direction, as listed below:
a.   To build a professional environmentalist organization.
b.   To plant patriotism through various of nature-oriented programs
c.   To implement the Tri Dharma in community service
d.   To give insights and improve knowledge regarding the nature and wild environment
e.   To build and improve the members' ability and give them insights regarding organization management

The activities in GIRIGAHANA are divided into four divisions, there are Mountain Forest, Cave Exploring, Rock Climbing, and Rafting. These divisions are intended for easier material management in each activities. The enthusiasm of the students in nature and outdoor drives GIRIGAHANA to participate in variety of clubs and government championship in the field of youth and sports, from city level up to national level.
Listed below are the GIRIGAHANA activities in the past few years : 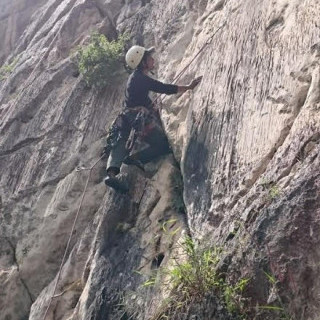